Forget the former things: Do not dwell on the past. See, I am doing a new thing! Now it springs up: Do you not perceive it? I am making a way in the wilderness and streams in wasteland. Break camps and advance!

In 2017, most Tanzanian people felt the effects of contractionary policies, which led to the rise of the popular slogan ‘vyuma vimekaza’.  The majority of people lamented on taxes and scarcity of money in circulation. Nevertheless, as we start 2018, there is an indication that the situation will change, given the two important announcements that were made. This entry will speculate the reasons for what lead to the rise of vyuma vimekaza and why this era is ending in 2018.

One of the explanations given to vyuma vimekaza is due to the crackdown on corruption. This explanation holds the truth when looking at the economic history of the country. Initially, with Ujamaa policy which pioneered self-reliance the government controlled all means of production and the private sector was very minimal. With the fall of Ujamaa policy, the private sector started to nourish, in some parts due to people who wanted to benefit themselves resulting in malpractice between the public and private sector partnership. Regardless of the malpractice, in part, greed incentivised the economy to grow at the expense of growing inequality. The current administration with an eye of reducing the inequality and increasing efficiency on the public sector, took measures to revisit their relationship with the private sector and thus the private sector started to suffer liquidity. For example, the government directed all public parastatal to use the central bank and the banks, which were accustomed to trade with the government money, therefore leading to the banks experiencing liquidation.

Taxation is another reason that can explain vyuma vimekaza. The new administration has increased tax collection, which leaves people with less disposable income. Majority of people have raised their concern on the tax regime, for example with the EFD machines, which small business argue that they cannot afford to buy. In addition, some people have expressed concern on been taxed, even before their business started. In short, there are many challenges with the tax regime. In reality, anywhere around the world from the time of the Roman Empire, no one loves the taxman.

Despite the above reasons, the good news is that the revenue authority TRA has changed some of its policies, which will ease the way people pay tax. It has recently announced that they will only collect taxes once the business has started operation. Such changes are significant as they indicate a change in fiscal policy, which can arguably lead to expansionary policies and hence in 2018 people might start saying vyuma vimeachia. 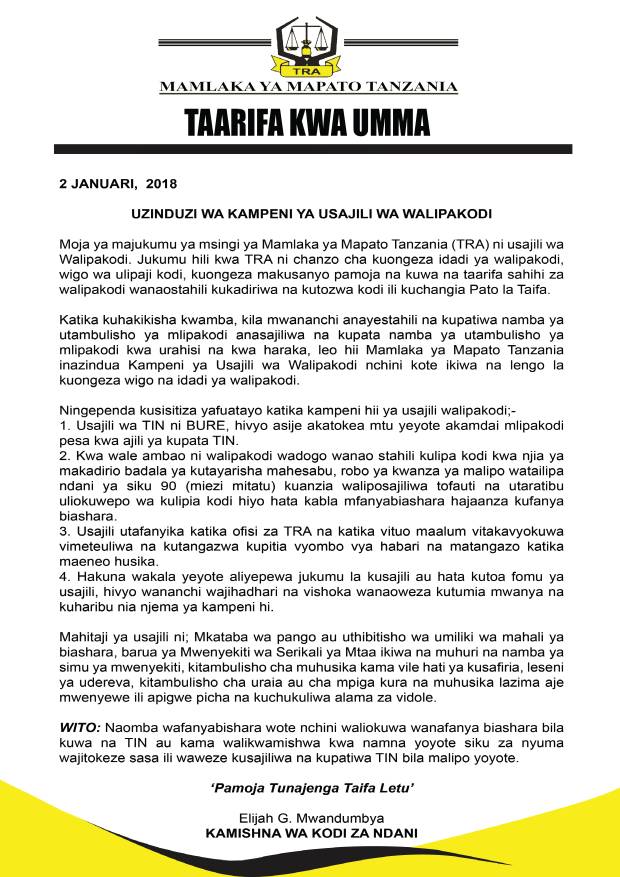 Furthermore, today the President has announced an injection of 200 billion that will go to pay the private sector, owed to them by the government. This injection will increase liquidity and hence increase the levels of trade and investment within the economy. I personally believe that these two announcements are indication that the government is moving towards expansionary policies and perhaps in due time, more announcements will establish whether the government has decided on this direction